This week’s question stems from me repeatedly saying to a friend: “If only we’d been given a magic wand to use once to make someone better, I’d have used it on you.”

It got me questioning: would I really have used it on her? If we’d ALL been given a wand like that, surely I’d have used it up before I even met her? Or wouldn’t I?

Here’s this week’s Know It By Heart: 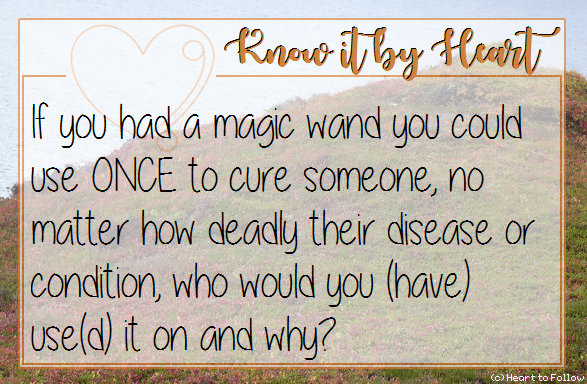 Fact is: that friend I mentioned was my illegal sister C.. She was really sick and eventually died from her illness. And if I had had a magic wand, indeed I would have used it on her, no questions asked.

Then again, if every living person on this planet would have been given a magic wand like that, I am certain I would have used mine to cure my mother’s cancer the second she got diagnosed, beating my father to it.

Unfortunately, there are no magic wands to help cure the ones we love. But if there were and you’d been given one, who would have used it on? Or on who would you use it today?

On who would you (have) use(d) your magic healing wand?

9 thoughts on “Know it by Heart”