For those of who who have eagerly been awaiting this day: I’ve updated my About Me page! Click on any of the links to go there (in this text, in the links session, on my image there –>) and see what is new.

I promise I will update more and write more. It’s just that every time I think I’m doing better, something else gets in the way. This time it’s a mild case of the flu and a large case of a terrible band currently playing outside on the grassy field near my house.
I reckon it’s to celebrate the new primary school’s first anniversary. However, they’d be better off playing the original version as opposed to this… In Dutch we would call it kattengejank (“a cat’s howling”).

So far, I’ve heard them severely abuse Ed Sheeran‘s Perfect as well as Narcotic from Liquido.

Kind of ironic, this, seeing as I share my personal playlist on my new About Me page – it’s filled with (good) music. Good and diverse, so go check it out!

That’s all I have to share right now. Life’s been pretty dull with the flu and work being just the same.

How have you all been doing? Let me know in the comments! 🙂

This Heart Warmer truly does what it’s picked for: warm your heart.

Chloe Meineck has developed a Music Memory Box which helps people with dementia to… live again. And laugh and enjoy themselves and for brief moments, get lost in lovely memories of moments long passed, but forever cherished.

How it works? Family members can gather photos and items with lots of emotional meaning for their loved one with dementia, and add computerised chips to them. These chips/items, by putting them in the centre of the box, can then each be linked to a certain song, so when next placed there that same song will play.

And these songs have remarkable effects on the person with dementia. Someone even described using the box on her mother as: “When we use the box, we get her back for a moment.” 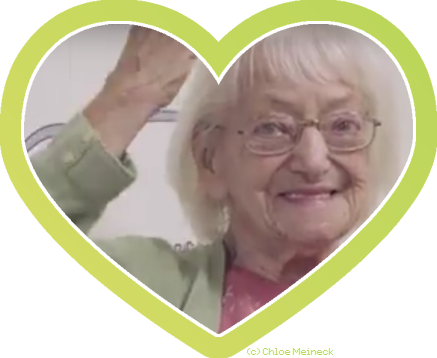 We should never underestimate the effect music can have on our minds, bodies and souls. And in this case: our memories.

I wish I could have had a box like this when my grandfather was still alive. All the stories he could have told me or those stolen moments won back again, even for just a fraction of time ❤ I am happy more and more people can benefit from this!

I wish you all a warm, happy and musically filled week!

Maybe you already know about this Heart Warmer, but stories of true friendships never cease to be amazing so I had to share this.

The Australian Poss and Molly found a true friend in each other. One was lonely because she had just lost her entire litter, the other had lost her mummy and was in desperate need of someone to take care of her.

That’s right: neither Molly nor Poss is human. The first is a beagle and the latter is a possum! Nevertheless, they seem inseparable:

The two adorable yet completely different creatures found love, support and friendship in each other! Since possums are nocturnal animals, Poss is usually asleep during the day, but her foster mummy is never too far out of sight. And at night, Molly’s owners often spot their beagle and its new best friend roaming around the property together.

Cute can’t get any more super than this!

Not convinced yet? Watch the following video:

Wishing you all a heart warming week, with lots of time to spare with your friends ❤

If you want to read more about Poss and Molly’s story, please go here

Do you know that feeling when you have to say goodbye to something, or someone, yet you really don’t want to?

Last week, my beloved Acer with Windows 7 and a similar old version of everything Office-related, decided it was time for retirement. I know, it’s sad. But I have to admit that my poor old (and its even a grey one) laptop served me very well for nearly 9 (!) years. So I reckon it is justified that it has decided it no longer wants to run fast, load pages like it used to, be a little distracted now and then, making everything freeze up…

I felt a little… like a betrayer as I used my dear Acer to buy its own replacement, yet also a little excited, because everything new is good, right?

I just spent two whole days trying to get that stupid Windows 10 to work FOR me instead of AGAINST me and I swear it’s a conspiracy of Microsoft to drive innocent people like me crazy as fast as possible!

And then when I thought I had it figured out, my Outlook went all psycho on me, and with Windows 10 and Outlook ganging up on me together, it’s needless to say the battle took hours.

But I persevered (do I ever give up?). I broke down the total AAAAAARGHHHHHHHHH Windows 10 Start Up Menu, who kept changing back to default after I’d adjusted it (read: after I spent ages adjusting it, hoping I’d end up enjoying it after all). I also broke down Outlook’s barriers by channeling my inner nerd and with a little (read: A LOT of) aid from Google.

I think I am okay now. I think.

Not sure yet. But… I am no longer screaming and desperate to throw my new Acer out of the window. After two days of owning it.

Adjusting can be difficult. What would make transitions like these easier, are programs that actually work as promised!

Anyway, the real reason I wanted to write this post was to let you all know I am still alive, yet a little less active than normal. I am not only stuck in transition laptop-wise, but also writing-posts-wise and job-wise. Seems like things are picking up for my coaching business, which is good, but also takes a lot of time. And that leads to me wanting to make a new, less-stressful posting schedule. Which I’ll get to if freaking Windows 10 will just stop playing games with me.

So you see: everything is connected in life. “In a circle, in a hoop that never ends.”

For now, here is a lovely video to help calm your nerves (in case you are also at war with Windows 10 and/or Outlook):

It’s just that special Saturday again! 😀 Today, feel free to share anything you want in the comments of this post! You want people to read your epic blog post? Share a link! You want everyone to know what you cooked up for dinner yesterday? Upload an image!

The only rule is that whatever you want to share has to be something positive!

Today, I want to share that, as I was strolling through the city centre yesterday, feeling a bit blue (and very cold), I got so happy when I heard the first sounds of a draaiorgel (special type of organ). My grandmother loved this kind of music, so now every time I hear those organ sounds I immediately think of her. And I have to race after the owner to give him some money, in my grandmother’s honour.

So even if I felt a bit lonely at first, this music sure lifted my spirits!

(And I managed to do my shopping without buying stuff I don’t actually need! I know, impressive, right!?)

This wasn’t the draaiorgel I came across, but you get an idea of the sound it makes. And maybe you’ll recognise some of the songs it plays!

About Missing Pieces And Fulfilment

About New Years And Old Acquaintances

About All Kinds Of Issues

About The Places I’d Go…

About Someone Who Inspires Me

About My Top 3 Pet Peeves

About What Someone Told Me About Myself That I Never Forgot

About Ten Things That Make Me Really Happy